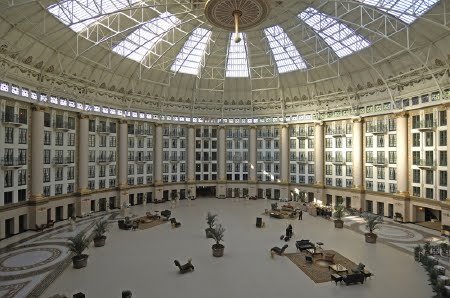 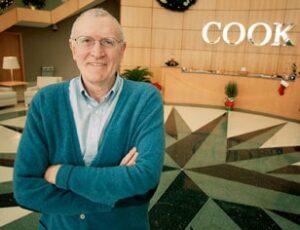 Bill Cook, who with his wife Gayle financed and oversaw the incredible restoration of the West Baden Springs Hotel and French Lick Springs Hotel, brought Pete Dye in to create a one-of-a-kind golf course, and generally restored the beauty and life to an area that sat for decades as a crumbling relic, passed away yesterday in his home at the age of 80.

Cook’s impact on the world of health care, the biotech industries, and medical devices is felt around the globe, and his impact in Bloomington and Indiana has been simply massive. I was deeply and truly honored by his support of SO COLD THE RIVER when it was released, and the resort has continued to support the book, which means a great deal to me. Paramount among those honors, though, was the chance to have lunch with Cook and his son Carl last year, when they offered me a gift of thanks for writing about a spot that meant so much to the family: it’s an original, unopened bottle of Pluto water, the source of so much trouble in the novel.

It sits on a shelf above my writing desk today, where it has been positioned since that lunch, and always will. This is a true loss to the community, and I’m deeply grateful I had the chance to meet Mr. Cook.

The most meaningful thing that came up in our conversation was when Mr. Cook told me that he and Gayle had walked down to the Wesley Chapel Gulf, featured in the book’s final scenes, because they were curious about it after reading the novel. Now, at this time he was not in great health, and the walk to the gulf, while not treacherous, is hardly easy, either. I was, and remain, deeply touched that he was interested enough in the story and the places to make that trip.

Below is an article from the Indianapolis Star detailing Cook’s accomplishments.

INDIANAPOLIS STAR
Bill Cook, founder of a Bloomington-based medical equipment company and one of the richest men in America, has died.

David McCarty, director of global communications for the Cook Group, said Cook died about 4:30 p.m. Friday at his Bloomington home from congestive heart failure. He was 80.

Cook, known throughout Indiana for his philanthropy and dedication to historic preservation, had been in failing health for some time. He had been scheduled to attend an event today to celebrate Indiana Landmarks’ grand opening of its new home at the Old Centrum in Indianapolis.

Those who knew Cook said he will leave a lasting legacy in the medical health field and in historic preservation.

“He was relentlessly curious and a believer in human health,” said David Johnson, president of Indianapolis-based BioCrossroads. “He was a deeply ethical and honest man. He believed that he would be able to carry out business the way he wanted to carry out business by keeping the company private rather than having it subject to the whims of Wall Street.”

Cook, a native of Illinois and a graduate of Northwestern University, built his wealth from humble beginnings. He developed a prototype for a catheterization process in 1963 in the spare bedroom of his Bloomington apartment with a $1,500 investment.

Cook built Cook Group Inc. into a worldwide conglomerate, with 42 companies under its umbrella. The Cook Group employs about 10,000 worldwide with sales estimated at more than $1.5 billion.

Cook’s company is one of the largest employers in Central Indiana, with about 3,000 workers in the Bloomington area.

The company makes a wide variety of medical devices for surgery, urology, cardiovascular, women’s health and other specialties. In recent years, Cook has developed several new products, including a mesh tube stent designed to open and treat arterial blockages.

“Bill’s many contributions to the medical industry are unprecedented, and his many contributions to the community and to charitable organizations are extraordinary,” Steve Ferguson, chairman of Cook Group, said in a statement. “It was through his unique vision, persistence and dedication that Cook grew into a compassionate and caring company for patients, customers and employees. He truly epitomized the meaning of success.”

Johnson, of BioCrossroads, said Cook was a pioneer in the medical field who believed that with the right equipment, doctors could perform surgeries through veins and arteries without having to make large incisions on a patient.

Cook developed those lifesaving devices and used them to build a model company, Johnson said. The Cook Group was one of the founding companies of BioCrossroads, which helps foster new life-sciences and biotechnology companies in Indiana.

“He’s left a strong company, a very good and profitable company and a strong management team,” Johnson said. “We’re very lucky to have that company here. They’re a tremendous asset to the state.”

Last fall, Forbes 400’s annual listing of the wealthiest people in the U.S. ranked Cook 101st with a worth of $3.1 billion. That wealth also made Cook the richest person in Indiana.

Despite his success and wealth, Johnson said, Cook was always very approachable and humble.

“If you had lunch in the dining room at Cook, if Bill was in town, he’d bring up a tray and sit and talk,” Johnson said. “He was there every single day. It was really his company.”

Through his business activities and philanthropy, Cook received many honors and awards. Buildings at Indiana University, Northwestern and Rose-Hulman Institute of Technology bear his name.

Cook was a powerful advocate for historic preservation and donated millions to charitable organizations across Indiana. Cook, his wife, Gayle, and their son, Carl, provided $10 million to finance restoration of the Old Centrum at 12th Street and Central Avenue on the Near Northside.

The red brick, 80,000-square-foot building, constructed in 1892, will become the new state headquarters for Indiana Landmarks. The building’s 400-seat Grand Hall and theater will be used for cultural performances, lectures, weddings and corporate events.

Marsh Davis, president of Indiana Landmarks, said Cook had a passion for turning rundown buildings into something beautiful and useful.

“Where Bill was special was that he could see the repurposing of a building into something that was not just saving a wonderful landmark but putting it to use in a positive and entrepreneurial fashion,” Davis said.

Davis said the restoration of the hotel was Cook’s “crowning achievement.”

John Ketzenberger, president of the Indiana Fiscal Policy Institute and a former columnist for The Indianapolis Star, said Cook’s passion for restoring historic landmarks has left a lasting footprint. He recalled meeting Cook during the restoration of the West Baden hotel.

“We were going through the hotel, and then here comes Bill Cook shambling along,” he said.

Cook invited Ketzenberger and other reporters to go on the “real tour” and took them to the roof of the building, where he showed off its magnificent view.

“He did it because he liked it. He thought it was cool, and he wanted to show it off,” Ketzenberger said.

Cook recently explained his philosophy in an interview with The Star.

“Our hope would be that people get a better understanding that preservation isn’t just to restore something but to preserve it with a function,” he said. “It’s far better to demonstrate you can generate capital and make money on older buildings. You don’t need to tear them down.”

Cook also was a major contributor to IU and a strong supporter of IU athletics. He had been a member of the IU Board of Trustees.

“We at Indiana University have lost a wonderful friend and partner in Bill Cook, who over the years has done so much to make IU the special place it is,” IU President Michael McRobbie said in a statement. “So many of us at IU have been touched at one time or another by Bill’s vision and generosity that I know I speak from the heart for all of us in conveying our profound and deepest sympathy to Gayle and Carl.”

IU basketball coach Tom Crean said he was stunned and saddened to learn of Cook’s death.

“It’s hard to do justice to what he meant to not only this university, community and state but even the world,” Crean said. “He was literally a life-changing giant of a man and leader. Not many people can say they made the world a better place because of work they did, but Mr. Cook sure can. The contributions he made will continue to impact lives forever.”

Besides wife Gayle and son Carl, survivors include a daughter-in-law, Marcy, and a granddaughter.