On the THOSE WHO WISH ME DEAD Movie 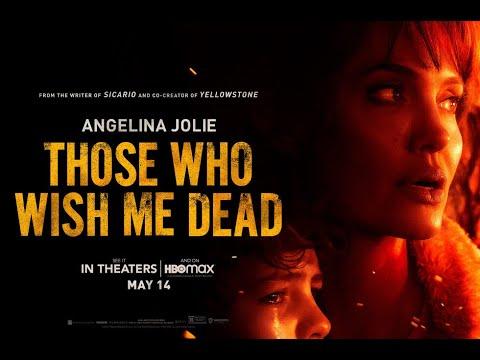 It has been suggested to me – or demanded of me, with threat of bodily harm – that it would be prudent to offer a few words from the author about the pending movie.

Seems easy. It really does. Just say a few words about the movie version of your book…

Whew. Not so easy. There is the long version (multiple studios, directors, writers, high points, low points) that you don’t want or need to hear. Then there is the short version: “I love it! Buy a ticket and then buy another book!” And you deserve better than that.

So what I will try to offer is some honest version of how I feel about it. Because that is the question that I keep hearing, and I love you guys for it. It is so kind, so generous. I can’t tell you how many people have expressed their genuine, bone-deep desire that I am happy with it.

There is the screenwriter version of me wrapped up in this, and that story is more complicated and the emotions more complex. Then there is the novelist. You are here because of the latter. Let me say clearly, then, speaking for the novelist: I am thrilled. The movie is a hell of a lot different than the book. There are plenty of choices I wouldn’t have made, sure. (I’m also not a director, so that’s probably as it should be.) So why am I thrilled? Let’s make a list:

Alan Robert Murray – Stick with me here, and I’ll explain why he matters so much.

Angelina Jolie – Seriously, do I need to add to this? No. She’s an icon. So let me add the rest of the cast: Jon Bernthal (Love him!), Medina Senghore (if you don’t like her in this movie, you need help), Finn Little (you’ll see him for the rest of your lives, so enjoy this intro; he’s great) Nicholas Hoult (huzzah!), Aidan Gillen (vote Carcetti!), Tyler Perry (in a cameo that absolutely kills), Jake Weber (wonderful, understated emotion), James Jordan (my favorite character actor of recent years, and that’s his term, not mine), Tory Kittles  (this guy read an actual book during breaks while shooting on the side of a mountain, guys!)

Ben Richardson – I will never forget watching Beasts of the Southern Wild and marveling at the cinematography. He’s a stunning artist.

Neil Spisak – The production designer on a lot of huge, complex movies (something called Spider-Man?), what he did with the fire tower, forest, and river was truly special to see.

Brian Tyler – Music is the way I relate to story. Brian Tyler delivered, and then some. Burned a cello, even! (True story.)

Garrett Basch, Mark Roybal – One is credited, and one probably is not but sure as hell should be. Those two guys pushed the boulder up the mountain. From book to screen isn’t an easy journey in the best of times, and this one didn’t make the run in the best of times. These guys are the reason anything exists beyond the book. They believed, they let me carry the ball, and then they figured out how to get it across the goal line. They each have extraordinary credits beyond this film, Oscars and Emmys and such, but to me, I’ll remember that they stayed the course and hung in there and fought to get it made.

And I’ll finally get to the one name on that list matters most to me:

The WB logo. I also know the newish BRON logo carries a unique stamp of quality that will last for a long time. Aaron Gilbert at BRON made the movie. He and his team carried it. They’ve got a bunch of Oscars for great movies, and they’re also making movies from underrepresented voices in this industry, this world. I’m extremely proud to have BRON on there, but…

But I watched a lot of movies as a kid that opened with that WB logo. On Friday nights (and in the summer, maybe a couple more nights) I’d go to Classical Film & Music in Fountain Square in downtown Bloomington, Indiana, and pick out a movie with my dad, and the whole family would watch it. Old movies. New movies were theater-only fare. My love of story has roots in cinema, no question, and a lot of those stories appeared to me sans source material, with that WB logo leading the way. The Maltese Falcon and The Exorcist. Bonnie and Clyde and The Treasure of the Sierra Madre. Casablanca and A Clockwork Orange. Deliverance and Mean Streets. The Searchers and Cool Hand Luke. Dirty Harry and Harry Potter.

My book is my book. Nobody can touch that. I’m not worried about that in the least. This movie, though, belongs to a lot of people. That is extraordinary to a loner like a writer. I’m in awe of the collaborative thing that is moviemaking. It is a humbling thing to have people with this kind of talent work on something that you dreamed up. Something unreal that you made real – and that they made three dimensional and quite different. The book falls away. The movie is born. Cynics can cite the transactional element of the business all they want, but as a creator, I assure you, it is a special experience. You don’t matter anymore. But the story? The story is still out there, growing without you. Book, what book? The audience doesn’t care. But my fire tower is standing in the mountains, good old #217 (a shoutout to Stephen King, The Shining, book not movie, naturally), and two bad men with guns are on the way, and a woman with a can of bear spray is about to cause them a hell of a lot of trouble. And, oh yeah, the forest is burning.

Whether you’ll like it or not? I can’t answer that, but I hope you’ll do me this solid:

Sit back. Relax. Enjoy the ride. Let the movie be its own thing.

And now, let’s finish with Alan Robert Murray. (I promised I would not forget about him.)

There’s a lot of gunplay in the movie. A lot of fire. A lot of tension that you’re not going to be listening for but will be feeling. The sound editor you can thank for that was a man named Alan Robert Murray. He died this year, which makes Those Who Wish Me Dead the last film in a career in which he was nominated for a record ten Academy Awards for sound editing. He won two. He worked on everything from Escape from Alcatraz and The Unforgiven to Star Trek and Lethal Weapon and Letters from Iwo Jima.

A guy who’d been nominated for ten Oscars worked on a version of a story that I cooked up while hiking through the Beartooth Mountains. If you think that I feel anything other than grateful to have this version out in the world, well, you and I share different philosophies.

I can promise you this much: The book is a better book than the movie. The movie is a better movie than the book.

As always, with much gratitude,
Michael