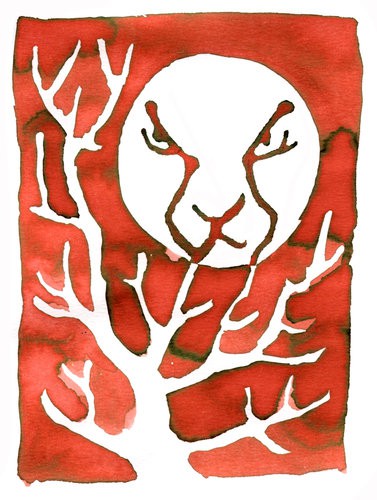 And we even got a great little sketch of a cat face on the moon! Nice work by Christoph Niemann.

Says Marilyn Stasio of the NYTBR:

It’s almost summer, so let’s get serious about those vacation reading lists. On second thought, let’s save the 600-page historical sagas and thickly plotted espionage thrillers for another day and kick back with something weird and wonderful — like a supernatural mystery.

Michael Koryta, who previously staked out that territory with “So Cold the River” and “The Cypress House,” takes it to loftier elevations with THE RIDGE (Little, Brown, $24.99), a freshly imagined and elegantly constructed variation on the dead-of-night ghost story. Set in an abandoned mining region in the foothills of rural Kentucky and drawing deeply on Koryta’s affinity for spooky places, this eerie tale hinges on a chapter of local history forgotten by all but Wyatt French, an eccentric old coot who lives alone in a lighthouse he built in the woods to keep the dark away. “So if you got a light, hold it high for me / I need it bad tonight, hold it high for me,” goes a sad poem hanging over his bed.

French becomes unhinged and commits suicide when a wildlife sanctuary for lions, tigers and other “massive, uneasy cats” moves into this remote area, intruding on his solitude and awakening nightmarish notions that something wicked is living up on Blade Ridge.

But before he kills himself, the old man passes on his forebodings to two of Sawyer County’s presumably more stable citizens, Chief Deputy Kevin Kimble, who is hopelessly in love with a woman currently doing time for killing her brutal husband (and taking a shot at Kevin), and Roy Darmus, who lost his job as the county’s official storyteller when the regional newspaper shut down. Although their sleuthing efforts establish a realistic baseline for the novel’s supernatural events, readers are swept along by Koryta’s narrative voice, which is surprisingly soft and low and poetically insinuating, considering the horrors he’s relating.

The presence of the great cats threatens the spirits of the woods, which are “heavy with the feel of magic.” And when a preternaturally powerful black cougar named Ira jumps the fence to take up the watch on these haunted hills, the scene is set for a battle that will either restore the balance of nature or plunge the whole region into darkness. Not to tip the ending of this extraordinarily imaginative story, but I’d put my money on Ira.