The Magic of Great Music

I write to music, and sometimes certain songs take on the feel of a soundtrack to me, adding layers to the characters and story. That’s never been more true than with The Prophet, when the music of Matthew Ryan and Brian Fallon, in particular, drove that book along. I got to know Matthew when he graciously agreed to let me use a quote from his haunting song “Return To Me” as The Prophet’s epigram, and since then I’ve taken a lot of inspiration not just from his music, but from his approach to his craft. (Read Michael’s 2012 interview with Matthew Ryan) 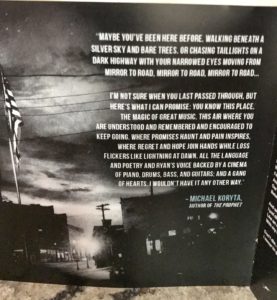 I don’t really have words to describe what it meant to have the chance to offer an intro in the liner notes of his new album, Hustle Up Starlings, which releases this week — and which happens to have been produced by Brian Fallon, who also plays lead guitar on every song. It was a rare, humbling, and special opportunity. I urge you to check out his work. I’ve never met a more dedicated writer…and then this poor guy has to put the words to music, too! I’m eternally grateful that he does, and in awe of his talent and his work ethic.